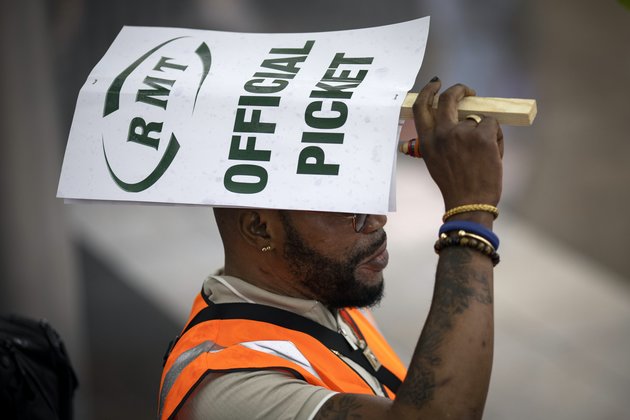 UK strikes: six milestones in the history of industrial action in Britain

Holidaymakers and commuters are expecting significant disruption this summer following a recent surge in strike action in the UK and Europe. UK train drivers are the latest group to consider striking in what could be the first national rail strike in more than 25 years

Strikes - a withdrawal of labour from employers - have been happening ever since the workers at the Royal Necropolis at Deir el-Medina in Egypt organised an uprising in 1152 BC over late wages. British industrial action has a much shorter, but still turbulent, history that has often been fuelled by changing economic conditions.

Workers today face high inflation and government reluctance to raise public sector wages, combined with the ongoing economic impact of the COVID-19 pandemic and resulting cost of living crisis. With continued industrial action very likely in the months ahead.

Here are some major milestones in the history of UK strike action to date:

In Britain, documented strike action started in the 17th century, when groups of skilled workers used brief periods of industrial action to get better conditions of work and pay. During the 18th century, various pieces of legislation made strikes illegal.

But when the Trade Union Act of 1871 allowed trade unions to become legal bodies, a flurry of industrial activity occurred in industries such as coal mining and textiles, as new unions fought for better conditions.

Following a lull during the first world war, industrial action intensified in the 1920s as employers tried to reduce wages amid much post-war economic and political change. Nearly 8 million days' work were lost to strikes in 1925, rising to 162 million lost days in 1926 when 1.7 million workers went on strike in support of a million miners.

Levels of strike activity in Britain fell again in the 1930s, but picked up significantly after the second world war. At this time, the majority of strikes - about 2,000 per year - were unofficial, or not supported by trade unions. This prompted government calls for greater union accountability, a cooling-off period before strikes, as well as ballots - or votes - on strikes.

The unions' rejection of these suggestions led to further industrial conflict, including two coal miners' strikes under Edward Heath's 1970-1974 Conservative government. The strikes led to power cuts across the country and then an enforced three-day working week to curb electricity use as the striking coal miners forced the government to ration dwindling fuel supplies.

4. 1970s: the failed social contract and the Winter of Discontent

Harold Wilson's Labour Party came to power in the 1974 general election and suggested a "social contract" with unions where they would curb wage demands in return for nationalisation and increased spending on social welfare. The government failed to deliver upon this agreement, however, and trade unions began to demand substantial wage rises to ensure members' pay kept up with the high inflation of the late 1970s.

An effort by Ford factory workers to gain a 25% weekly raise in August 1978, for example, triggered nine weeks of strikes and was settled with a 16.5% wage increase. This kicked off a a period now known as the Winter of Discontent. The following January, 20,000 railway workers held four one-day strikes over the course of the month. About 1.3 million municipal workers also called a one-day national strike for pay increases on January 22 1979.

The strikers were increasingly vilified by politicians and the media during this time. For example, a comment made by a councillor about the possibility of "burials at sea" due to a strike by Merseyside grave diggers in 1978 and 1979 saw trade unions publicly criticised for their lack of sympathy for the bereaved. Similarly, conservative politicians criticised the Labour government over a January 1979 public sector strike that included refuse collectors and resulted in rubbish piled high on the streets of central London.

5. 1980s: the rise of Thatcherism and the decline of union power

The election of Margaret Thatcher as Conservative prime minister in May 1979, signalled the start of a period of major restrictions on trade union power. Five employment acts and one Trade Union Act were introduced between the start of Thatcher's two terms and the end of John Major's Conservative government in 1997. These laws restricted the right of picketing, prevented unions bringing their members out in support of other unions and introduced fines and asset seizures for unions that struck without a ballot.

Some of this legislation was tested in another miners' strike that lasted from 1984 into 1985. After a proposed 5.2% wage increase was rejected by the National Union of Mineworkers (NUM) in October 1983, the National Coal Board (the UK corporation created to run nationalised coal mines) threatened to reduce output and was rumoured to have drawn up a list of pit closures.

An unballoted strike erupted on March 9 1984, which lasted for nearly a year. It progressed into a national strike as NUM leader Arthur Scargill sent "flying pickets" - striking union members - to different picket lines around the country by car and coach. Mass picketing led to violent clashes and even deaths. There were also several legal twists and turns as the High Court fined the NUM Pound 200,000 and seized its assets because it had not called an official strike by ballot.

The strike ended without any settlement when the miners returned to work without agreement on March 3 1985. After a year without pay, they had effectively been starved into submission.

Trade union power and activism has steadily declined since the turbulence of the 1980s. Membership had grown from 4 million in 1914 to a peak of 13.2 million in 1979, but has since halved to about 6.5 million people.

The number of days lost to strikes in recent years is typically little more than one million, with the highest annual total of working days lost in one year since 2000 was 1.4 million in 2011.

But industrial action is stirring again. As transport workers, barristers and airline staff have all called strike action in recent weeks, this figure may well be exceeded in 2022.